So you all know I am I big apply fan boy, but thanks to my buddy Khemchandra Persadsingh , he give me his Boxee Box for a weekend, yes, last weekend and i can't give it back. No, really, i can't my kids where using it the same day. i didn't have to show them a thing and the iPhone remote worked the same. All the tv shows that i have in my FreeNAS looked so much better. Now i have a Hacked AppleTV that is running Boxee, and it does need restarting ever so often while i did not have to do a thing with the Boxee Box. The Apple TVs shows tv shows and movies from iTunes just as good, but 90% of my content is downloads, so it wins hands down. My only downs right now are the Load time for shows, it is twice as long as the AppleTV and using the remote at night, you can't see the keyboard and that is it.
Now i need to really compere this to the new AppleTV that i was sure that i was going to buy, until the Boxee Box get here.
Thinking about it now, i really need to compare a Boxee Box, Apple TV (G2) PlayStation 3 and Web enable TV. But for now, if you don't have a PlayStation 3 and in the market for a set top box, really think about getting a Boxee Box.
I will have to end this review short as i don't feel like i have all the facts to hand to you. So consisder this my preview.
Later ppl
No comments:

New iMacs are here and with Thunderbolt

Apple released their new iMacs this week adding the new Thunderbolt Port. What is Thunderbolt? We will get to that, but first a quick look at the specs of these new computers.

Starting from the Low end, we have:

Now Thunderbolt (originally codenamed Light Peak) is an interface for connecting peripheral devices to a computer via an expansion bus. Thunderbolt was developed by Intel and brought to market with technical collaboration from Apple. Thunderbolt essentially combines PCI Express and DisplayPort into a new serial data interface that can be carried over longer and less costly cables. The interface was originally intended to run on an optical physical layer using components and flexible optical fiber cabling. However, conventional copper wiring turned out to be able to furnish the desired 10 Gb/s Thunderbolt bandwidth at lower cost. Later versions of Thunderbolt are still planned to introduce an optical physical layer based on Intel silicon photonics technology.
Seeing that Thunderbolt is based on PCI Express technology, Intel/Apple can use existing USB and FireWire peripherals — even connect to Gigabit Ethernet and Fibre Channel networks — using simple adapters. And because Thunderbolt is based on DisplayPort technology, the video standard for high-resolution displays, any Mini DisplayPort display plugs right into the Thunderbolt port. To connect a DisplayPort, DVI, HDMI, or VGA display, just use an existing adapter. 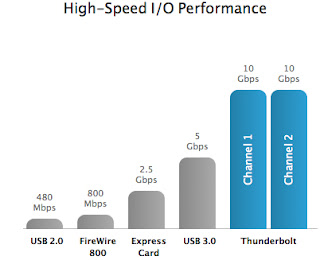 How does Thunderbolt stack against the rest?

You may have realized Apple does not carry USB 3.0 Ports and therefore hopes on the forward movement of Thunderbolt as the new Hi-Speed interface standard.

Some quick specs of Thunderbolt

Some early tests done by Apple 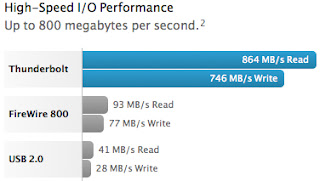 And using the same drive these where the number of 720p streams that where possible using Thunderbolt. 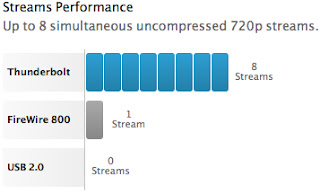 
So what does Thunderbolt mean for me Today as a "normal' user... Nothing... I have not been a USB fan for hi-speed connects, and Firewire works very well for me when i have to connect my video camera or when connenting external Hard Drives. But i am very happy to know that the day in which i need to connect a second Monitor, back-up my iPhoto library (now at 420GB) or connect to some upcoming cool up and coming gear (all one one port), I already have that port siting there waiting.
As a "PowerUser" I can see no disadvantages in not using this port, even today, as two of my past-times are Photography and Video, working from home means there is a limit to number of devices i can put on my desk. We always need/want faster drives, and a second monitor is always a good thing to have. Being able to have these simple wants over "one cable" is a big plus. This means, Firewire camera to the Raid Drive to a (HDMI) 34' Sony and then to a iMac all on "one cable". Come on... And that is just the start and things to come.
I have always been a Power User, meaning that i always had to buy PowerMacs, but this line of computers have truly have moved me to really consider being a iMac user and not because of price, but because of performance. Starting at i5 4GB of RAM, Sandy Bridge and Thunderbolt @ $7000TT, that is a very easy sell for me.

Up till now Google to me was mostly "search". Now i love Google's super clean interface.

And as a mac user we love not thing more. I also do have a Gmail Account, well two, a "kesnut@ and kester.johnson@ that i use for odd things and my main account is MobleMe from Apple. 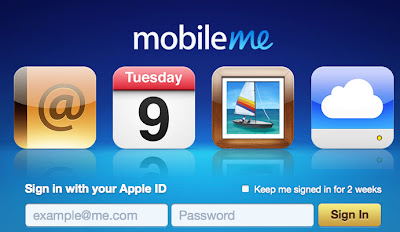 So a buddy of mine +Ismaaeel Baksh sent me a Google+ invite seeing that we both share the love for iPhones mainly and other tech stuff. Now in my mind i was thinking that i not going to do this "facebook: thing again, if it is anything like that i am out". But on looking at it was given "circles"

and my mind said, "hey, we can redo this the *right* way",  where yes i have friends, but there are the friends that i just lime with, as opposed to the friends i have a vested interest in and like the family member that you call and then there are the ones that you only see at Christmas.
What would be my first circle?

I have about 350+ contact in my gmail, is it that i only know 6 ppl with Macs, No, But these are the ppl, that if it where 3am and Steve jobs was at my house, if they where not on their way, i can wake them and tell them. (overly dramatic of course). But these are the ppl, not only have a mac or an iPhone, but live in the Apple ecosystem. People who have used macs for 25yrs plus, and stayed with apple in the up and down, we knew, we loved the products that much. It was a honest Circle and it was something that could not be done in twitter, facebook or skype, because Google+ now lets me, post news, videos, links, have chats voice or video, with this group only and from one interface.
I can now organize my life online the same as my real life. Now with that said, those with "fake" online lives, the switch may not be as "nice". Google "assumes" that you are, who you say you are. And if it is that you want to live in a world where people are who they say they are, you will totally love Google+. This meant that i will need investing more in my kester.johnson account and build on the creditability of that name. I don't think that there was any other time in the human race, where your voice was just key strokes away for the world to see, less you live in china. I not saying that this is so because of Goolge plus, but because of the Times we live in. It is getting harder to find "credible" sources out there, more are more people are finding it easy to have their views heard, true or false, positive or negative. So when i see +Leo Laporte, i know that is leo and that is a voice that i trust because and i can feel safe in following.
So i have lost a weekend and a week, playing with Google+ and in doing so i have been playing with all of the other Google's apps and i have found these that guys have some really good apps. Reader and Analytic are the ones i am playing with now. Some i have added to my iPhone like Latitude, this weekend, i will be moving all my contacts to Google+ and have it sorted. Even move all my work contact and see if you have work and home separated.
Now this service is still in beta, and Google says that there for lots of more stuff coming, but i am liking it already.
Have a good weekend all...
See ren, i post... :)
1 comment: